It has been nearly a month since I ran the Hershey Half Marathon in honor of Oliver and to raise money for galactosemia research at the Children’s Hospital of Philadelphia. Thank you ALL for the tremendous outpouring of love and support. Your financial contributions are of course so appreciated, but I am also in awe of all of the emotional support everyone offered! Thanks to all of you, we were able to raise $1,750 for the hospital! I could spend my entire life trying to thank you and I would never be able to do an adequate job. 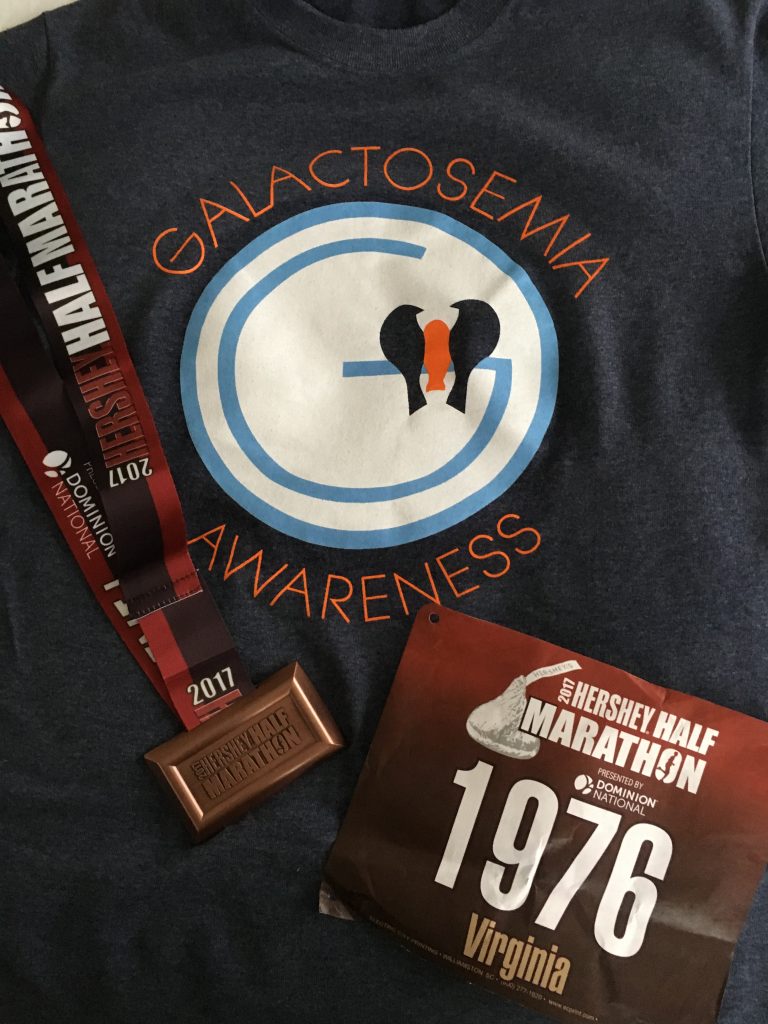 If I’m perfectly honest, I had a really tough time with this race! This is the third half marathon I have ever run and only the second since having Oliver. It isn’t that I thought it was going to be EASIER, I just thought I knew what I was getting myself into. But it just goes to show, you can be as prepared as you could possibly be and sometimes there are factors outside of your control. Some days just aren’t your days. 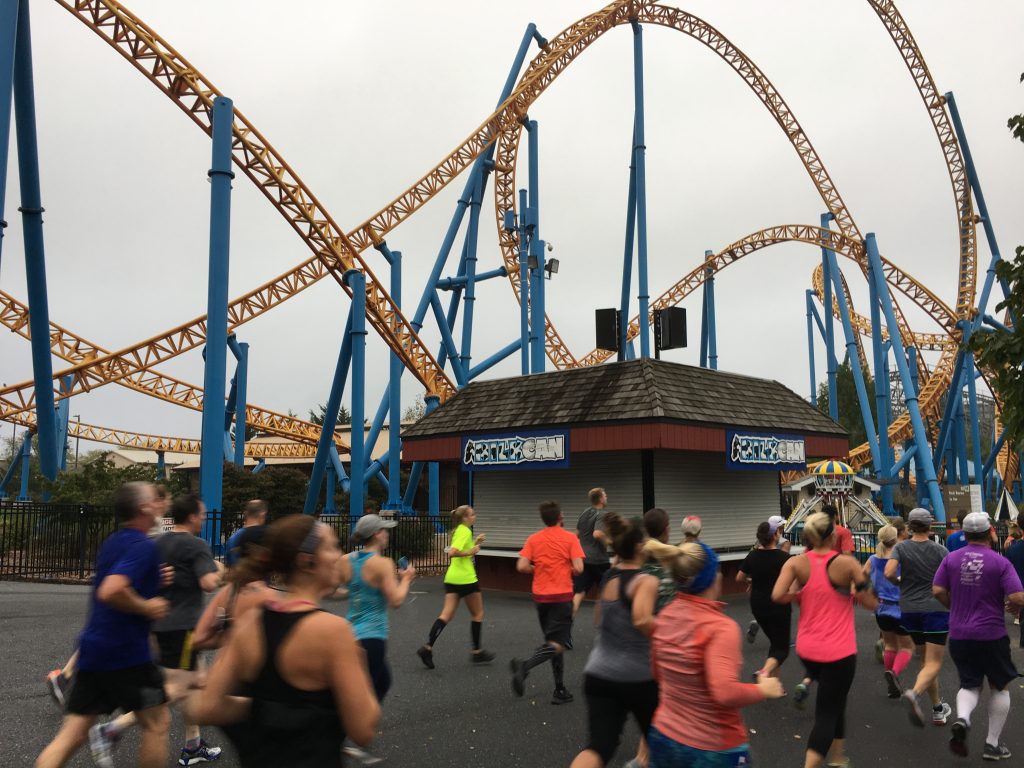 The good news is that I finished AND managed to shave a few minutes off for a new PR. At this rate, by the time I am in my sixties, I should be an elite runner!

The day was beautiful, cooler in the morning but really warm by the time I crossed the finish line. I have met quite a few runners in this area who swear by this particular race and some have completed it multiple times. I have to agree that it was a fun run! Although hilly in spots, the course was scenic and the spectators were great, especially these two right here. 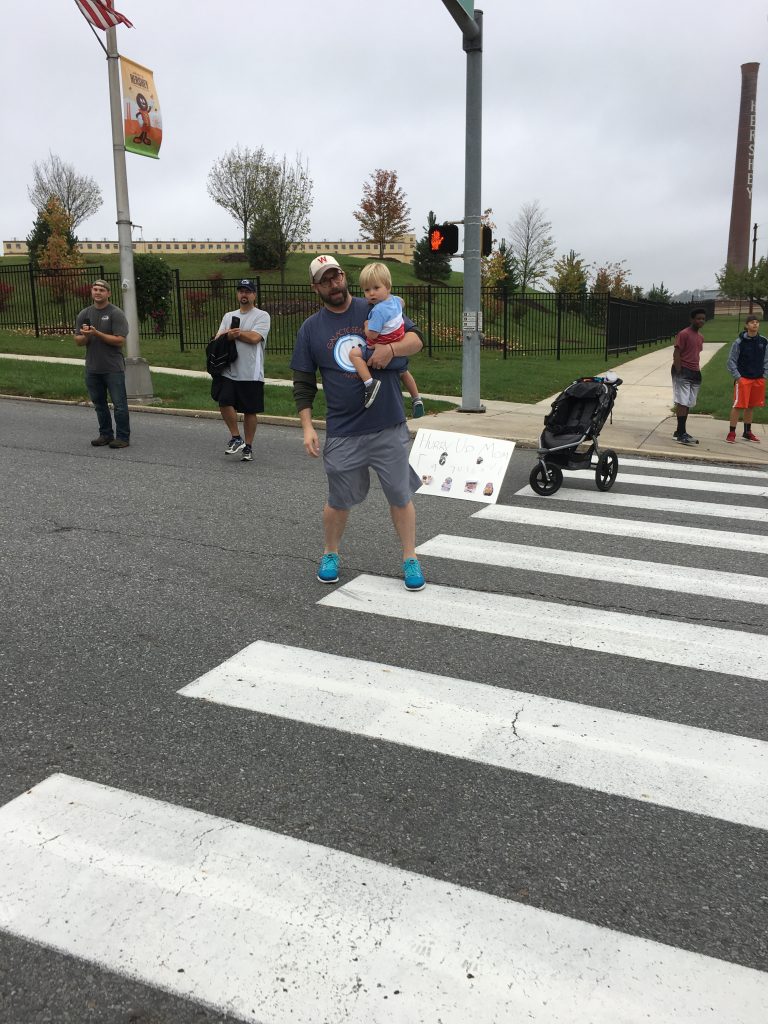 It was so great having these two cheer me on! They caught me at around 7 miles and then again around 11! It was just the right motivation and pick-me-up I needed for the second half of the race!

During the toughest spots, I was reminded of how lucky I am to have our happy, funny little man to hug when I crossed that finish line and how fortunate HE is to have the love and support of so many people who are in his corner and who want to help make sure we see a day when there are therapies and a cure for galactosemia and other metabolic conditions. 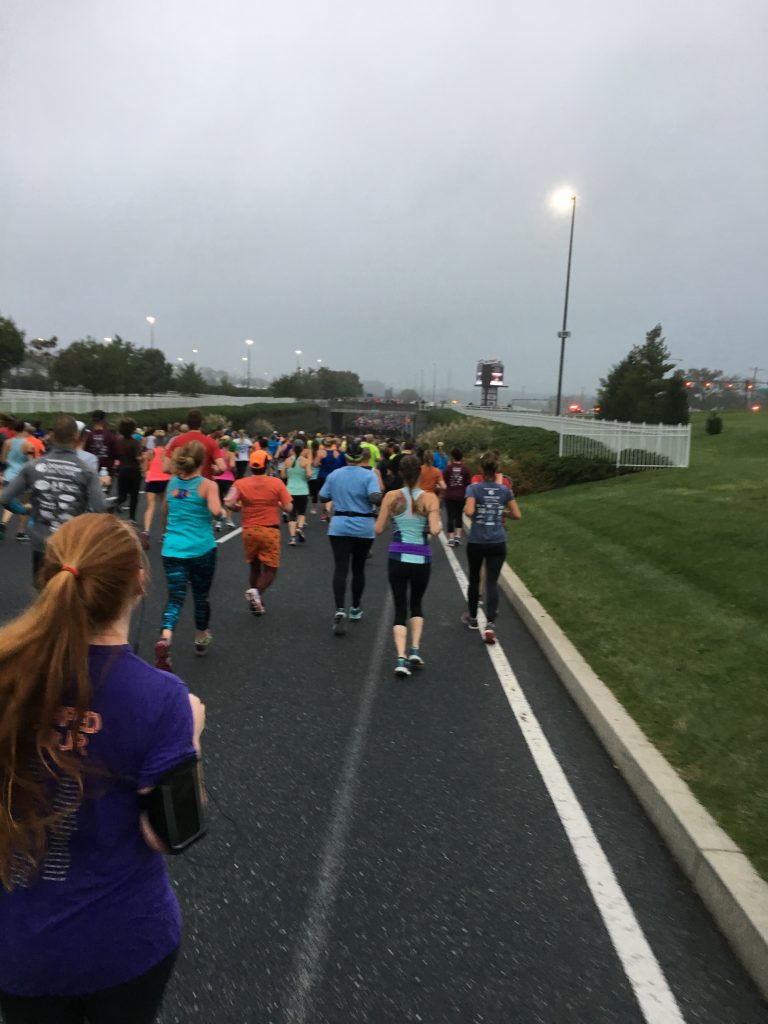 In the end, the struggles were all worth it. I finished (relatively) strong and avoided injury along the way. We are hoping to make this an annual fundraising event, but even if we decide to try some new ways to raise money for galactosemia research, I will continue rocking my galactosemia t-shirt at every race, large or small, to continue raising awareness! 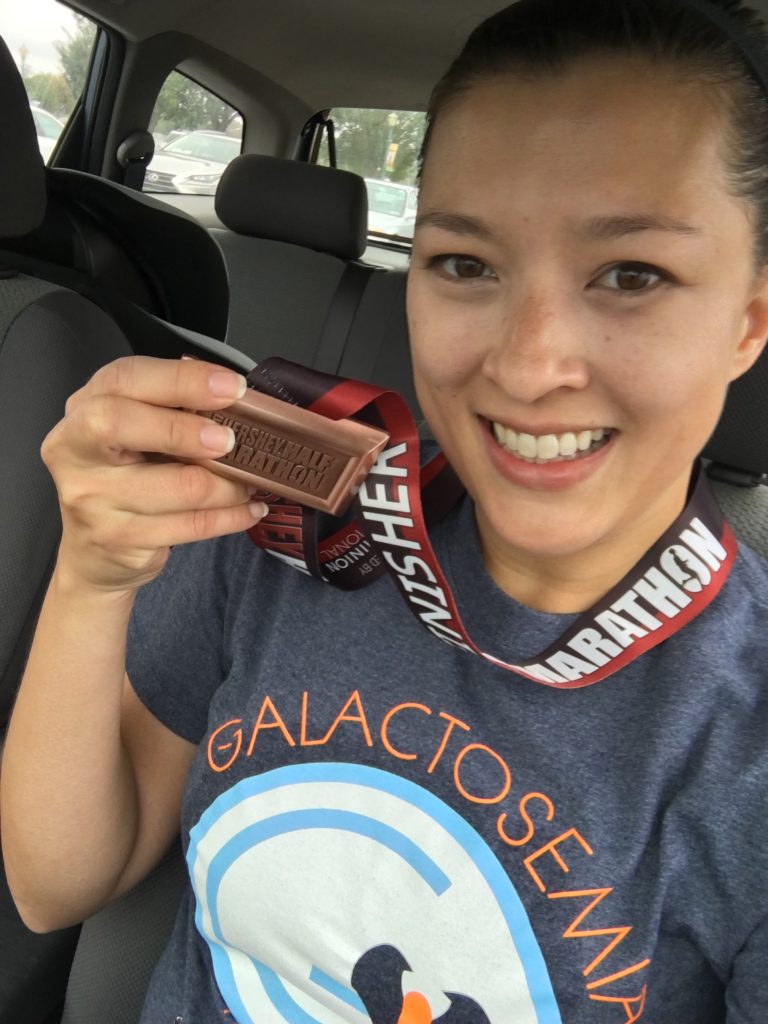 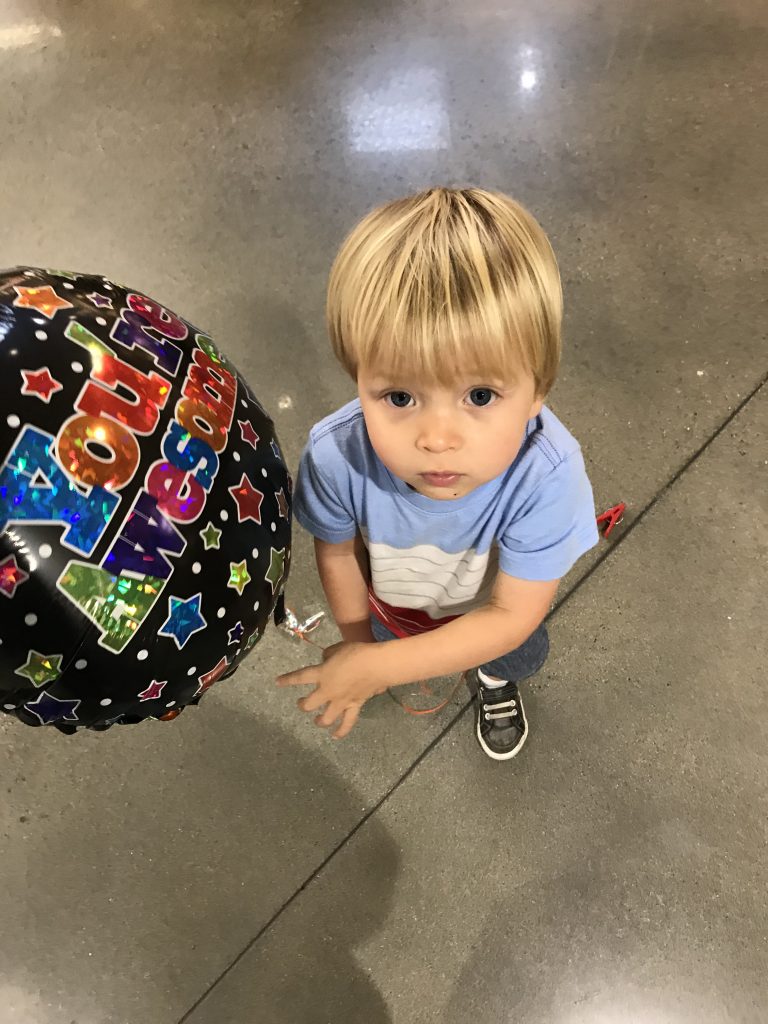 Ollie wants you all to know what he thinks of you! You’re AWESOME! 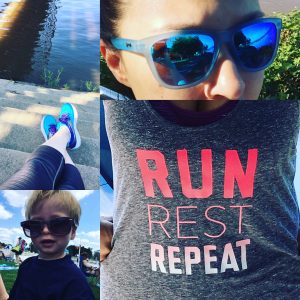 It’s the night before the big race and I’ve had the overwhelming feeling all day that the universe is trying to remind me just how good and decent people can be. 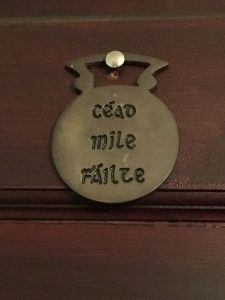 Take this talisman. It’s hanging on the front door of my lodgings for the evening. I had never heard the phrase before, but recognized it as probably Gaelic and when I looked it up I see the literal translation is “a hundred thousand welcomes” and it is, in fact, a common Irish greeting. After the day I have been having today, it seems evermore meaningful.

When we originally planned this trip to Philadelphia, John and Ollie were supposed to be joining me so we had booked a hotel near the start/finish of the course to make life easy. We booked months in advance and it was still ridiculously expensive. We could have booked something further way, but the added headache of finding parking and navigating closed roads hardly seemed worth it. We even contemplated getting up super early and driving in from Harrisburg the morning of but, again, that seemed like a logistical nightmare. So when we finally decided a few weeks from race day that it would be too much to schlep poor little O to the race to hang out all day just to catch a glimpse of me for a few seconds on the course, we started to reevaluate. It’s one thing to justify the expense of the hotel when all three of us needed a place to stay, but now that it would just be me flying solo, it gave me pause. Don’t get me wrong, the idea of having  a large comfy bed all to myself for the night in a luxury hotel sounded fantastic, but it just seemed like  a little too much. So I decided to go with an Airbnb rental instead. Renting a room in someone’s home, rather than their full apartment or house, would get me close to the start line without breaking the bank. Double win.

I was a little apprehensive about it but I knew in the end I was only really going to need a place to lay my head for the night and the race starts at 7:30am so I would be out the door so early that even if it ended up being the worst experience of my life, it would only be brief. To my surprise, my host, Bill, has been absolutely amazing. Accommodating, easy-going, kind, and helpful. Truly everything you ever wanted in an Airbnb host. And the thing is, I would have showered him with all of this lavish praise even before  he did the most amazing thing ever.

When I got here, we started chatting about my plan for the morning (he already knew I was running), other times I had been in the city, etc. I mentioned that my most recent Philadelphia outings have been to CHOP where Oliver sees his doctors and then we started talking about my #TeamCHOP fundraising efforts and galactosemia in general. I didn’t think much of it more than just making conversation. But before he left for dinner, he came by my room and handed me most of what I paid to stay here and insisted I put it towards our fundraising efforts. He said when his daughter was born, she spent some time at CHOP and it is a place that means a lot to him as well. I tried to tell him it was absolutely not necessary. And then I cried. I cried a lot, you guys. How could I not? How could a completely out-of-the-blue act of generosity and kindness from a person who I had just met not reduce me to tears?

It’s a reminder that goodness is out there and shows itself when it can. Sometimes in little ways, and sometimes, like now, in the biggest and best ways. I’m going to carry this feeling with me into tomorrow where, with any lucky, I won’t need the little emergency car to come scrape me off the pavement and scoop me into the cart. Wish us luck!