Hello all of you glorious humans! You may have noticed I’ve been on a bit of a hiatus for the past few months. I knew heading into the holidays, we wanted to spend time focusing on enjoying family time, creating new traditions and memories,  and  catching up with friends, which meant taking as much of a break from the regular push-pull of life (including this site) as possible. Add to that scheduled break both John and I starting new gigs (surprise!) and bing-bam-boom…Happy February!

Here’s what you may have missed in Ollie’s world while we were away:

In early December, Oliver had his one-year check up with his metabolism specialists in Philadelphia. The appointment was one year and one day from his N/IICU discharge. Over the last year, Oliver has been in to see his doctors a half-dozen times and each time has been a measure of the progress he is making both developmentally and in terms of his numbers, specifically Galactose-1-Phosphate (Gal-1-P) and galactitol.* 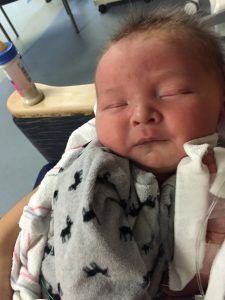 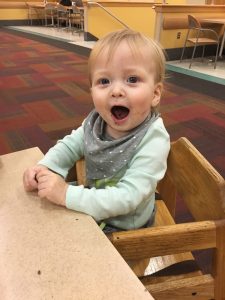 The appointment, which marked one full year of Oliver living with galactosemia, went really well. He’s showing proper weight and height gains, his physical development is right on track, and so far there hasn’t been anything to point to other complications. As always, the visit included a trip to the lab for a blood draw (awful as always, but that’s a post for another day) and should have included a urine collection. Unfortunately, we had made the appointment for late in the day and Oliver’s bladder, no matter how much we pumped it full of formula and water, just would not cooperate before the lab needed to close.

We also had our regular meeting with  one of Oliver’s dietitians while we were there. We are finally (FINALLY!) making the move away from his soy formula and towards dairy-free milk like a big boy! We had been making a gradual, and pretty passive, shift toward weaning but now that we have an official green light, it’s both exciting and petrifying. His soy formula has always felt like the tether that was keeping him safe at dock. In my mind, it was also the thing keeping his numbers trending downward. Now, it feels like we are starting to drift out to sea and it is hard to feel at ease with the change.

Fast forward a few weeks (well, more like 6 to 8 weeks) and we received Oliver’s Gal-1-P result. To our surprise, it went up. Not a large increase, and not enough for his doctor to be alarmed, but it is still so disappointing. His numbers have been going down beautifully since his diagnosis…until now.

To give you a frame of reference, we are told that the Gal-1-P in a person without galactosemia should be less than 1. When Oliver was admitted to the N/IICU a year ago, his was higher than 130. As a galactosemia patient, Oliver’s doctor would be happy if his Gal-1-P gets down to less than 5 and remains there throughout his life. His most recent Gal-1-P prior to December was 9.6 (so close!); it was 10.33 at his December appointment. 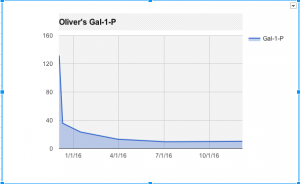 It went up and we haven’t even gotten it below the ideal baseline yet.

It’s hard not to panic when you see the results for your child – once so beautifully trending downward – start on what appears to be an uptick. It’s hard not to feel as though you are failing him somehow. That you must have done something wrong, read the labels of his food incorrectly, given him something that he shouldn’t have. Familiar feelings of panic can start to bubble up and bring you back to that very lonely and sad place you once were earlier in diagnosis.

But then, hopefully, you will have a helpful, gracious doctor to bring you back to the present. Even though I know his doctor would have called with a follow-up if he had been concerned with Ollie’s numbers, I couldn’t help myself from calling his office. Thankfully he returned my call the same day, heading into the evening, sparing me from a restless night of worry and what-if’s. He reassured me that this isn’t out of the ordinary and reminded me that there is a standard deviation with the Gal-1-P (i.e. an acceptable error rate) of 1 or 2, so that this number alone isn’t a cause for alarm. He also reminded me that a small change like this is less concerning than a huge upswing that might alert us to something wrong and that, given Oliver’s very high number at diagnosis, he’s been very happy with his progress and trends so far. And, perhaps most importantly, he reminded me it’s always okay to ring him when I’m concerned, he’s happy to answer my questions (even if it’s for the millionth time; my words not his), and that Oliver is a healthy, happy kid.

We hung up and I proceeded to cry (shocking, I know), mostly from relief but a little bit because when you feel vulnerable and scared and someone is kind to you and reminds you, with some authority on the matter, that your kid is fine, it can be hard not to cry from a combination of happiness and gratitude.

Then, in January, Oliver was due for a check-up with the pediatric ophthalmologist. One of the more common conditions that can arise in children with galactosemia is cataracts. This was Oliver’s third eye exam since birth (once in the N/IICU and another at around 2 months old). I am happy to report his eyes are still clear. 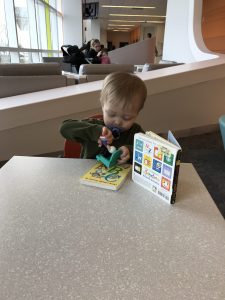 Passing the time, waiting to see the doctor…

This also happened to be the first big doctor’s visit that I did not attend with Oliver. As mentioned above, John and I both started new jobs this year and we have needed to do a little more divide-and-conquering to make sure Oliver’s needs are being met. I was a little nervous to hear how Oliver would handle the dilation drops now that he has arms that can certainly take a swing at you and legs that can land a pretty good kick out of protest. John was happy to report that he took the drops and examination like the champ that he is.

Even though his eyes are still clear, we’ll continue to monitor him annually or sooner if we have reason to suspect anything with his eyes has started to change. We also managed to get a urine sample to the lab on that trip, so we are awaiting his galactitol result.

So, long story short: We’ve made it through a year! And so far, so good.

I’ll be back to providing updates semi-regularly now that the dust on the new year has settled!

Thanks for checking in!

*Of course, these two numbers aren’t the only two that matter and there are a host of other tests, measurements, etc. run each time he goes, but these are the two, at least at this point, that we are the most concerned with keeping in check.