My pregnancy with Oliver, and the labor and delivery to follow, were unremarkable. At least, that is how I’ve heard it described by medical professionals. Forty weeks of normal. The closest thing we came to even a blip on the radar was a borderline gestational diabetes test that warranted a second, ultimately normal, blood test. Otherwise, it was pretty much a textbook pregnancy. Of course, that’s not how John and I would describe the whole thing. Unremarkable. It was the least unremarkable thing to ever have happened to us. This pregnancy and this baby was everything. He consumed every thought and every moment from the very beginning. And, well, really that has never changed.

But as we’ve come to know, an unremarkable pregnancy, even one as treasured and planned as this one, did not mean there would not be challenges once he arrived. And on the fourth day of his life, two days after bringing him home from the hospital, these two exhausted, bleary-eyed yet over-the-moon new parents got a call that changed everything.

All three of us–John, Oliver, and myself–happened to be in the car shuttling me to a postpartum doctor’s appointment when I noticed I had missed a call and had a new voicemail. The message was from a nurse at the Children’s Hospital of Philadelphia calling to inform us that one of our son’s tests had come back as positive and to please call her immediately. Immediately. That’s not a word you want to hear in a message about your child. But I actually scoffed a little when I listened to it. It was a mistake, I told my husband. After all, our son hadn’t been born in Philadelphia and he hadn’t undergone any tests. His birth hospital had discharged our happy, healthy baby to us, free to go home and start our life as a family of three. There was no reason this nurse should be calling me. She hadn’t even used my name or Oliver’s in her message. It was definitely a mistake. Someone is going to feel really badly about this, I remember saying.

We had forgotten entirely about his newborn screening. The nurses had taken the blood sample so soon after birth, before the throes of childbirth had even really settled, and we were just so ecstatic he was finally  here and crying and lovely and BIG and in my arms. We were focused on remembering this moment and him, all of him, his face, his eyes, everything, so much so that I don’t recall much of what happened between the time he arrived and the time we were getting settled into our post-delivery accommodations. I only have a vague recollection of a nurse saying she would be doing a heel prick for some blood and him crying just a little before being placed safely back into my arms. But that tiny memory had gotten washed away in the excitement and exhaustion of it all. It wasn’t until after I found myself calling back this CHOP nurse, feeling most self-assured that she had made a mistake, that little memory started to materialize. During that call, she did in fact confirm our son’s name and informed us one of his newborn screening tests was positive. My stomach plunged. I am not sure what I said then or if I said anything at all, but it was enough for John to pull over and turn off the car. I sat in the back seat with Oliver and searched him as he slept, all while this nurse on the phone launched into a series of questions. No, I was not near a hospital. Yes, he had been eating and sleeping. Yes, he was making diapers and they seemed normal. Well, I’m not sure, how can you tell if a baby is lethargic? We thought newborns slept a lot. I don’t know if we have a history of galactosemia in our family. I’ve never heard of galactosemia. Can you spell that? I don’t know how soon we can get to Philadelphia. She paused for a moment, probably sensing the wheels coming off the bus, and asked if I had any questions. I asked the only one that came to mind. Is our baby going to die?  I barely got it out. Squeaked it was more like it. The tears came hot and fast after that. Her answer was no, but I needed to stop nursing and I needed to get him to a hospital as soon as possible.

The next hours were a blur, but basically involved me launching into a fit of hysterics, John doing his best to hold himself together so at least one of us could answer calls from doctors and soak in the next steps, and there was a lot of kissing the baby’s forehead and stroking his little hands and cheeks by both of us while he essentially slept through all of it. We were instructed to go to Penn State Hershey Medical Center’s emergency room where they had been apprised of our situation and were expecting us. When we arrived, the staff took Oliver back for an evaluation, starting with a test of his blood glucose level. He was hypoglycemic and his glucose level was low enough that everything immediately became more harried, petrifying really, and we watched as our four-day-old baby now lay on a stretcher in the middle of an emergency room. A team of doctors and nurses descended upon him. Our baby, who at birth had weighed in at a whopping 9 lbs., 9 oz., now seemed impossibly tiny. For my part, all I could do was look on, helpless and sobbing as they worked to get an IV started. Both legs, both arms, both hands. It finally ended up in the side of his head. At the time, I didn’t know this was a common practice. It was horrifying to watch. And even though I know now that it was necessary and effective, it isn’t something I ever want to repeat. 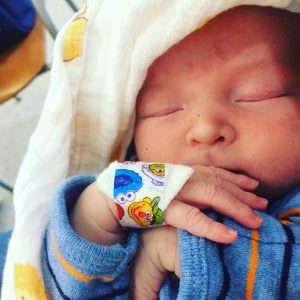 Once the line was in and fluids started, we were finally able to secure a room and the nurse explained what had happened, particularly why it was so important they acted quickly. They worried his hypoglycemia would lead to seizures. That was the immediate fear. Along with the IV fluids, they fed him little packets of a sugar solution. Oliver was placed onto a bili blanket and under a bili light to combat the jaundice caused by the galactosemia (what we had earlier thought was just a typical case of jaundice). The nurse had given him an orange pacifier to help comfort him and had placed little goggles over his eyes. He looked like a little glowing alien. Next, they needed to draw his blood. Lots of blood. His ER doctor wasn’t even sure they could get the amount of blood from him needed for the tests. It took some effort, but they eventually got all that they needed

For the record, babies are amazing creatures. Resilient, calm, forgiving. After all the poking and prodding, the weird lights and wires, having parents who were barely holding on, our little Oliver just laid there, content with his new pacifier, unaware of his bloodstained dinosaur onesie, and happy to sleep under the warm lights. The doctors decided he needed to get to CHOP sooner rather than later. So, we loaded little Oliver into an isolette and into the back of an ambulance where I rode along with him while John went home to pack our bags and catch the last train of the night to Philadelphia.

One long, very bumpy ambulance ride later Oliver and I arrived in Philadelphia and were met by another team of doctors and nurses at the NICU. More poking (his IV line had clotted or clogged or just generally stopped working), more prodding, more questions and paperwork until finally he was settled into his little NICU bassinet. Side note: have you ever seen a skilled NICU nurse coax a vein out of a little baby’s arm and get an IV in on the first try? There are no words to describe how amazing it is to behold and how thankful as a parent it makes you. Eventually he was comfy and cozy, and happy to snooze as if nothing had happened at all. 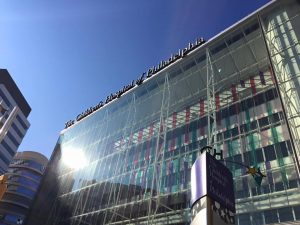 Even though at the time it felt like an eternity, in hindsight, we were lucky Oliver only needed to stay in the NICU for a few days just long enough to be sure he would tolerate a switch to a soy-based formula, was able to regulate his own blood sugar and potassium once the IV fluids were withdrawn and all of his vitals stayed steady. He bounced back pretty quickly and despite  a scary few days, was on his way home one day before his one week birthday. It has and continues to be a long journey, but we grow more confident in our ability to tackle any challenges headed our way with each passing day.